Could I really learn to play worship guitar?

The guitar is quite a friendly instrument; you can almost immediately make a reasonable sound on it. With a little effort you can quickly learn to play worship guitar.

It is difficult to produce a decent sound on some instruments without many hours of practise – the violin springs to mind. I have a friend who is a professional classical violinist who has performed with the London Symphony Orchestra. He asserts “It is impossible to play the violin in tune”.

Play in a Day 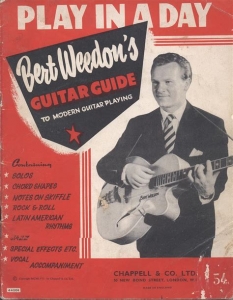 Play in a Day guitar guide by Bert Weedon

There is a famous guitar instructional book called Play in a Day by UK guitarist Bert Weedon. I recently took a look at it; there is no way you could work through that whole book in one day from complete beginner, but it did get a lot of people started. Many of the British guitarists who became household names in the 60s cite this book as an influence on getting them started.

Songwriter and guitarist Bob Dylan wrote some great worship songs – I particularly recommend his album Slow Train Coming. Dylan said: “I saved the money I had made working on my daddy’s truck and bought a Silvertone guitar from Sears Roebuck. I was 12. I just bought a book of chords and began to play.”

Instead of Play in a Day our courses are called 10 Week Worship Guitar. Some people want to play the guitar for their own personal worship, which is fine. Others might want to lead a prayer group, home group or pastorate. We think that by the end of the ten weeks you should be in a place where you feel that you are capable of this.

In response to some misconceptions that people have about learning the guitar:
• You are never too old to learn the guitar.
• You think that you have no talent. There is a current theory that there is no such thing as talent – you get as good at something as the amount of time that you put in (more on this later).
• You do not need to read music to play worship guitar. Many fine guitarists don’t. There is an old joke ‘How do you get a guitarist to be quiet? Put a piece of sheet music in front of him!”

Hundreds of people have passed through the 10-week worship guitar courses over the fifteen or so years that we have been running them at HTB; Kensington Temple; St George’s, Holborn; St Mary’s, Bryanston Square; Jesus House for all the Nations and other churches. Some have gone on to lead worship at HTB and elsewhere, others have fallen by the (guitar-playing) wayside.

On week one of the 10-week worship leader guitar course the students play their first song – even if they are complete beginners who have never even seen a guitar before.

When playing the guitar you train your two hands do two different jobs – the fingers of the left hand are making chord shapes and the right arm is bouncing up and down providing the rhythm. You will need to work on these two separate areas.

The first six weeks is the hardest part of learning the guitar– it’s just getting your fingers going. If you can get through the pain of these six weeks you should do okay. It’s my job as a guitar teacher to coax and motivate you through this period. On week seven of the course students often have a bit of a breakthrough and realise “yes, I can play the guitar!”

• Learn to tune your guitar.
• Make some noise and have fun with the guitar.
• Play the guitar as a way to relax after work.
• Hang out with other like-minded people who are learning to play music and play together. Often the groups of students on the guitar courses form friendships.
• Listen to music. Listen with a different ear – listen analytically.
• Keep you guitar to hand – a friend of mine says that the hardest part about practising is getting the instrument out of it’s case.

Persist – that means practise and keep going. I can show you what you need to know to play your song, but I can’t play it for you. You have to train your fingers to execute some new tasks – just like learning any new skill.
The basic equation is that you get as good on the instrument as the amount of time that you put in. Try and pick up the guitar every day – I know we’re all busy but if you can pick up the guitar for five or ten minutes every day that works better than cramming in an hour before your next lesson; all the better if you can play for half an hour a day.

Some things to be aware of:
• Accept that you will sometimes be frustrated. Progress when learning the guitar is slow – that’s okay. You won’t be able to do things instantaneously.
• You will get sore fingers at first – take that as a good sign.
• Don’t be too impatient. Learning any new skill takes time.

All that said the guitar is still a serious instrument and if you want to play concerts at the Albert Hall (or Carnegie Hall, or Sydney Opera House), it may take a lot of time and dedication.

How long will it take to learn the guitar?

As author Philip Sudo said “Beginning students often ask, ‘How long will it take me to learn the guitar?’ My answer is, as long as you live – that short… The guitar is learned day by day, minute by minute, second by second, now to eternity. There is no faster way”. Sudo, P: Guitar pp. 16-17.

It’s easy to look at professional Christian musicians and think to yourself “I could never do that”. But it’s good to bear in mind that the great musicians all started somewhere.
HTB worship leader Al Gordon described to me the first time he lead worship:
“First time I led worship was in a home group at my church Holy Trinity Brompton. I only knew one song, which was ‘He is the Lord and He Reigns on High’ by Kevin Proche, it has four chords in it and I knew at that stage two chords G and C. So I kind of boldly set around playing that song for 15 minutes just playing the two chords I knew. It sounded terrible. And in fact there were ten people in the room when I started and about three when I finished because it was so painful they had to go outside to laugh.”

So can you really learn to play worship guitar? Sure you can. In all the years I’ve been teaching I’ve never seen anyone who is not capable of playing the guitar. It requires the decision to do so. Commitment to see it through, and allocating a little time to practise what you are learning.

Go on, have a go at learning the guitar, you might surprise yourself.

Email for more details and updates on the guitar courses.