By Simon10th June 2019June 23rd, 2019The Guitar - design and development, The Guitar in the USA, worship guitar
No Comments

Now, over the next few weeks and months, here on the blog, I’m sharing something which I’ve not extensively shared anywhere before. I’ll be sharing some work from my PH.D, which focuses on the development of the guitar over the last century, and it’s influence on the music produced on it. If you’re interested in learning more about the guitar, look no further than this blog. If you know others who would be interested in this too, please share with them.

One of the principal influences on guitar design was the musicians’ need for greater volume in order to perform before larger groups of people, and to compete in ensembles and against louder instruments.

A major influential development that took place in guitar design in the United States was the use of strings made of steel, as opposed to the gut or nylon used on Spanish guitars. As Evans observed “… all the main types of steel-string guitar now in use are essentially of American design, and were developed in the late nineteenth and early twentieth centuries” (1977: 220). Both the Gibson and Martin companies began to produce steel strung guitars by the turn of the century. Evans says “Steel strings have higher tension than gut or nylon and so transfer more energy to the top [of the guitar] and thus produce a louder volume” (1977: 220). Furthermore, he goes on to say that steel strings “produce more overtones than nylon – giving a characteristic ‘jangling’ tone” (220). The advent of the steel string is also central to the blues idiom because it facilitates inflections that are vital to attain the vocal-like slurs, and the neutral pitches of blue notes. Nylon or gut strings stretch making inflections difficult to attain with any degree of accuracy. 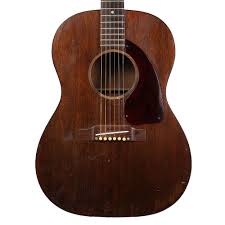 The importance of the inflection of strings can be seen from the following example. On the steel string guitar the bass strings have a central core that is ‘wound’ by a thinner steel wire. The construction of these bass strings does not facilitate inflection to any great degree, (although a slight micro-tonal inflection, particularly of the bass E string, is common within the blues idiom). It was standard that the four lowest strings were wound in this fashion. However, with the inflection of the wound G-string the thin binding is prone to becoming worn from the friction with the metal fret and, furthermore, an unwound or ‘plain’ G facilitates a greater degree of inflection. Because of this it has become commonplace for the lead guitarist to replace the 4th wound string (the G string) with a ‘plain’ string. A number of guitarists have claimed credit for this innovation. The Oklahoma born blues guitarist Lowell Fulson (1921 – 1999) implies that he believes that T-Bone Walker was the first. Describing Walker’s technique Fulson has said: “… and instead of a wrapped G he [Walker] used a plain one, because you couldn’t bend or quiver a G without it would unwind on you too fast. So the slick G became the thing, mostly all blues players went to it.”(Dance 1987: 165)

Nylon strings exert a pull on the guitar of around one hundred and five pounds. The increased tension of steel strings increases this pull to between one hundred and eighty five to two hundred and forty pounds depending on the gauge. This gave rise to a need for greater strength in the guitar’s construction. In 1922 Thadders McHugh patented the “adjustable metal reinforced truss rod for the neck, which was fundamental to the development of the modern guitar” (Duchossoir 1981: 4). The truss rod, fitted into a groove cut in the neck of the guitar, counteracts “the tendency of the pull of the strings to make the neck bow” (Evans 1977: 266). The added reinforcement “permitted the necks of Gibson instruments to be considerably slimmed and streamlined for easier playing” (Duchossoir 1981: 4). Evans implies this influenced the tactile aspect of guitar playing saying that the narrower neck, “evolved to suit generations of country, jazz, folk and blues players, who find it easier to handle and more appropriate to their fingering techniques” (1977: 266)…

Leading figures in the development of the guitar: Part One

Leading figures in the development of the guitar: Part One