By Simon17th June 2019June 23rd, 2019The Guitar - design and development, The Guitar in the USA, worship guitar, Worship Guitar Course
No Comments

Now, over the next few weeks and months, here on the blog, I’m sharing something which I’ve not extensively shared anywhere before. I’ll be sharing some work from my PH.D, which focuses on the development of the guitar over the last century, and it’s influence on the music produced on it. If you’re interested in learning more about the guitar, look no further than this blog. If you know others who would be interested in this too, please share with them.

As the solo style of guitar playing emerged guitarists struggled with the instrument’s lack of volume to compete in ensembles. The guitar could be recorded loudly enough in an ensemble by careful microphone placement, but for live work the solo guitarist had to work with a quieter ensemble.

During the 1920s because of insufficient volume the jazz guitarist was unable to solo in the context of big band dance music. This inspired a desire to increase the volume of the guitar. The acoustic guitar described thus far is termed a ‘flat-top’ guitar. On this type of instrument the strings terminate at a bridge, which is glued onto the soundboard. Vibrations are “transmitted to the table by a rocking motion of the bridge” (Evans 1977: 220).

A new, innovative design was created with the ‘arch-top’ guitar, primarily by the Gibson company who drew on the construction concepts of the violin, which featured a carved top and back giving greater strength to the body. On the arch-top guitar the “strings pass over the bridge and are attached to a tailpiece. The soundboard is activated by more vertical oscillations” (Evans 1977: 220). Evans goes on to say that the “tilted neck allows a higher bridge, which increases the angle of the strings as they pass across it and thus the vertical pressure on the table. The increased pressure helps to transmit more string vibration to the top, and gives the guitar greater volume” (1977: 221)

The Gibson L5 arch-top guitar was designed by Gibson employee Lloyd Loar and introduced in 1923. The instrument had steel strings, two f-holes for sound projection, and was designed to be played with a plectrum. The advent of this instrument caused the guitar to supersede the banjo in the rhythm section of jazz bands. According to Duchossior “… it still remains today one of the greatest achievements in the field of acoustic guitars, and a standard of comparison for musicians.” (1981: 2) 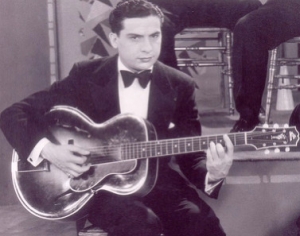 A European attempt to overcome the volume limitations of the guitar was designed by the Italian guitarist and instrument maker Mario Maccaferri, and manufactured at the Selmer factory in Paris beginning in 1932. The body of the instrument contains a second, internal soundbox which increases volume and sustain. This instrument was popularised by the Belgian jazz guitarist Django Reinhardt (1910 – 1953). 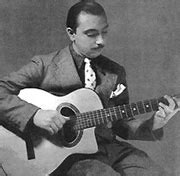 It would take a more radical innovation than these, to fully liberate the guitarist from his primary role as an accompanist…

By the way, if you’ve always wanted to play worship guitar but have never found the time, I’d love to introduce you to learning to play from scratch by going through my FREE 3-part miniseries which will give you not only the skills, but will also give you three new worship songs to add to your repertoire. Click HERE to access the free series and start (or continue!) your worship guitar journey today! Course Schedule