By Simon24th June 2019The Guitar - design and development, The Guitar in the USA, worship guitar, Worship Guitar Course
No Comments

Over the past few weeks here on the blog, I’ve been sharing something which I’ve not extensively shared anywhere before – some work from my PH.D, which focuses on the development of the guitar over the last century, and it’s influence on the music produced on it. Feel free to go back through the last few posts to get a feel of what’s been shared so far. This week, I begin to dive into the development of the electric guitar, the evolution of new styles and beyond. If you’re interested in learning more about the guitar, look no further than this blog. If you know others who would be interested in this too, please share with them.

In the first decades of the century the design of the guitar was constantly undergoing modification in an attempt to increase the volume to cope with larger performance situations. More radical attempts to solve the problem of volume limitation of the guitar were being made by several people contemporaneously. Their solution was to electronically amplify the volume of the instrument. On the electric guitar a ‘pick-up’ converts string vibrations into an electrical signal. Duchossoir explains that the pick-up:

… consists of a permanent wire magnet and a coil of insulated copper wire. The coil is placed, either around the magnet, or around a polar mass magnetized through contact with the magnet. The pick-up is then placed in such a way that a magnetic field is created around the strings, the vibrations of which generate a weak current in the coil that can be amplified and transmitted to a loudspeaker. (1981: 14) 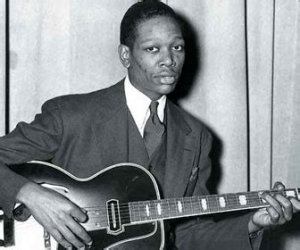 Mongan describes the importance that the electric guitar had in the evolution of jazz:

The basis of acoustic guitar technique was to play with as many down strokes as possible to obtain maximum volume and definition. Using the weight of the forearm, with the elbow as a pivot, gave the acoustic player great attack. Now, with the amplifier doing all the ‘hard’ work, the guitarist was free to use a more subtle, lighter approach which adapted better to the requirement of the bop player (1983: 99).

However the electric guitar was not quickly accepted in popular music. Lloyd Loar, a musician and composer, began working for Gibson in 1919. He was responsible for design and experimental work. Loar was the craftsman responsible for the design of the Gibson L5 guitar. The first experiments with amplifying guitars for the Gibson company had been carried out by Loar as early as 1924. Gibson, however, felt that there would be no market for the electric guitar, so Loar resigned and formed the short-lived Varitone Company in the same year…