By Simon22nd July 2019The Electric Guitar, The Guitar - design and development, The Guitar in the USA
No Comments

“Little did [Eddie] Durham and [Floyd] Smith realize what they were unleashing on the world, unable to imagine the earsplitting decibels and raunchy sonorities of modern rock guitars” (Schuller 1989: 358).

Electric guitars were designed after 1945 with a ‘cutaway’, which enabled the performer to access the upper octave of the guitar fretboard above the twelfth fret. The Gibson ES-350 model of 1947 had a rounded ‘Venetian’ cutaway.

Broadly speaking there are two types of electric guitar; hollow bodied, (also known as semi-acoustic), and solid bodied. The semi-acoustic guitar, because of resonance of the body, is prone to ‘feedback’ whereby part of the sound output from a loudspeaker is returned to the pick-up, causing the guitar’s body to vibrate and resulting in a high pitched screech. Feedback, once considered a problem, during the 1960s became an integral part of the guitarists’ vocabulary. For Mongan,

The guitar underwent a major technological revolution with the advent of the solid-body instrument. First experimented with back in the early 1940s by pioneers Les Paul and Leo Fender, the solid-body instrument was developed to overcome the problem of feedback… for the first time, the amplifier, used for 20 years only to boost the feeble volume of the guitar, became an integral part of the instrument. (1983: 193/194)

The solid body enhanced the possibility of further increasing the volume and sustain of the guitar. The first commercially manufactured solid-body electric guitar to succeed on a significant scale was the Fender Broadcaster of 1948. This model was renamed the Telecaster in 1950. This was followed by the Gibson Les Paul in 1952. Les Paul had worked on the idea of a solid bodied guitar as early as the 1930s, but Gibson at the time were, once again, unconvinced of its commercial appeal… 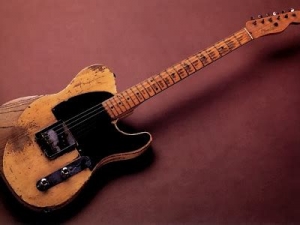 Join me here on the blog again next week as I begin to share on a brand new topic. I hope you’ve enjoyed the journey over the past few weeks and months exploring the design, development and innovation of the guitar.