The two pre-eminent figures whose influence helped with the widening acceptance of the electric guitar in popular music were the blues performer T-Bone Walker and the jazz musician Charlie Christian. Eddie Durham said “T-Bone was the first I heard playing it, [electric guitar] though I’d been fooling with it, too. But Bone was as big in blues as Charlie Christian was in jazz, the greatest I ever heard” (Dance 1987: 46). 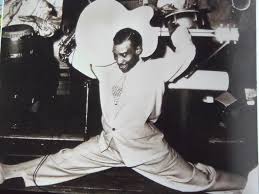 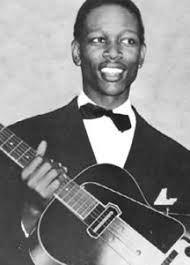 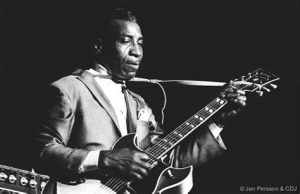 Walker’s wife Vi said “All the time on the road he was backstage practising and experimenting with the electric guitar… It was more exciting than when he played acoustic, and the sound was so new that people started talking” (Dance 1987: 57). Record store owner’s wife, Marili Morden, saw Walker playing in Los Angeles in 1940. She said, “I wasn’t expecting to prefer electric guitar to acoustic, but the way T-Bone played was fantastic. It was new to us all, and I was dumbfounded” (Dance 1987: 51).

Walker said: “I started many a guitarist off on the blues. For about five years I was up there by myself. There weren’t too many blues guitarists could play amplified guitar” (Jones, 1975: 10).

All of Lonnie Johnson’s earliest recordings were on acoustic instruments. He did not record with an electric guitar until November 2nd, 1939.

Initially there was some degree of prejudice against the electric guitar. Mongan observes that around the period from 1936 to 1938 Christian was experimenting with the electric guitar, and said that in this he was: “Unlike most guitarists, who were afraid of it, and who spurned the instrument as a bastard invention” (1983: 86). In a well known incident the record producer and jazz critic John Hammond took Christian to Los Angeles to audition for Benny Goodman. Goodman refused to let Christian plug in his amplifier. Hammond had to arrange to surreptitiously get Christian, plus guitar and amplifier, onto the bandstand at Goodman’s gig at the Victor Hugo Restaurant. Hammond described the incident:

When Benny got on the stand and saw Charlie sitting there, I thought he was literally going to kill me, since he had told me there was no possible way he could use him. He got back at me by calling ‘Rose Room,’ a tune he was sure Charlie didn’t know. He was mistaken, because he did know it and, on the third chorus, he signalled Charlie to take a chorus. Charlie went wild. One chorus followed another… Nobody had heard anything like it from any musician, let alone a guitarist (Mongan 1983: 88-89).

The ES-150 model was not a spectacular success for the Gibson company, who did not even produce electric guitars during the period from 1942 to 1946. Although Christian’s popularity in jazz, and Walker’s in blues went some way to making the electric guitar acceptable, a broad commercial acceptance of the instrument was not established until after 1945…

Join me here on the blog again next week as I share some more on the development of the electric guitar, this time looking at the period from 1945 and beyond.