By Simon9th July 2019The Electric Guitar, The Guitar - design and development, The Guitar in the USA, Uncategorised
No Comments

Over the past few weeks here on the blog, I’ve been sharing something which I’ve not extensively shared anywhere before – some work from my PH.D, which focuses on the development of the guitar over the last century, and it’s influence on the music produced on it. Feel free to go back through the last few posts to get a feel of what’s been shared so far. This week, I continue to dive into the development of the electric guitar, the evolution of new styles and beyond. If you’re interested in learning more about the guitar, look no further than this blog. If you know others who would be interested in this too, please share with them.

In the jazz idiom Eddie Durham (1906 – 1987) was one of the first exponents of the electric instrument. Durham, born in San Marcos, Texas, was playing the guitar through a separate amplifier by 1932. He recorded ‘Hittin’ the Bottle’ on 30th September, 1935, with the Kansas City Six, featuring Count Basie. This is probably the first recorded example of any form of guitar amplification, at least three years before any commercially built form of electric guitar was generally available. Durham said:

I was playing straight [acoustic] guitar and I always hit the big bands. The bands drown you out, you see, so I’d take a straight guitar and get into the mike, put it right in the soundhole of the guitar so it could be heard. I don’t think anyone had done that before. (Mongan 1983: 80-81) 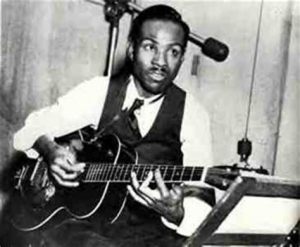 In 1937, while he was touring with Count Basie, Durham encouraged both Charlie Christian and Floyd Smith (1917 – 1982) to take up the electric instrument. Durham said, “I don’t think Christian had ever seen a guitar with an amplifier until he met me. I influenced Floyd Smith to get an electric guitar too” (Shaw 1987: 116). Durham had met Christian in Oklahoma City and encouraged him to buy an electric Gibson ES-150, an electrified version of the L-50 guitar, which had been introduced to their catalogue in 1936 at a cost of $72.50. The model was later re-named the Charlie Christian model. Eddie Barefield, a saxophonist and arranger for the band leader Bennie Moten, knew Christian when he was in Oklahoma City and said that he had taken guitar lessons from Eddie Durham (Gitler 1985: 41).

Solo passages of increasing length and complexity can be heard by Durham on recordings by Moten, Lunceford and Count Basie. Basie’s ‘Time Out’ (1937) contrasts Freddie Green’s acoustic rhythm guitar with Durham’s electric solo. By 1938 Durham was also using a Gibson ES-150. Durham recorded nine titles in 1938 on an electric guitar in the Kansas City Five and Kansas City Six bands. During the same year the Virginian born guitarist and composer Leonard Ware recorded amplified guitar with Sidney Bechet. Durham’s most ambitious guitar playing can be heard on recordings dating from 1940 under his own direction including ‘Moten Swing’, ‘I Want a Little Girl’ and ‘Kansas City Jazz’ (Decca DL 8044).

Floyd Smith (1917 – 1982), from St. Louis, played ukulele from 1932 with bands led by Dewey Jackson and Charlie Creath. He first recorded on electric guitar with the Jeter-Pillars Orchestra in 1937, and then went on to play with Andy Kirk between 1939 and1942, recording one of the first electric guitar blues solos ‘Floyd’s Guitar Blues’ (Decca 2483) with that band on March 16th, 1939. 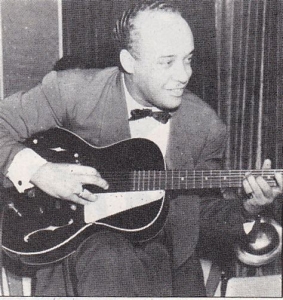 Jazz guitarist Teddy Bunn (1909 – 1978) who first recorded with electric guitar in 1940 describes the new expressive qualities of the instrument “… I was always one for experimenting and I wanted to get a hard staccato tone. Electric gave me more opportunities” (Mongan 1983: 41)…